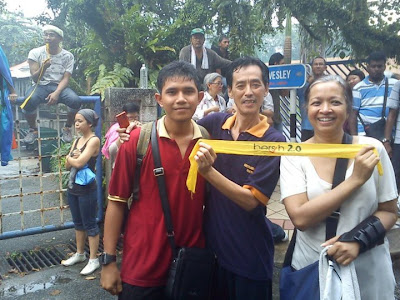 I have to say that the night before I had many many misgivings, especially after reading about the army doing exercises with the FRU. Could the government seriously be contemplating shooting their own people? Who knows? My stomach was in knots thinking about the many young people I knew who were intent on going, including my daughter. Would I be able to forgive myself if something happened to them?

After seeking advice from various friends, I finally decided that I could not stay safely at home while my daughter, friends and colleagues faced possible danger. I had to walk with them. Besides even if I stayed home, I would have spent all my time worrying. So I had to go. 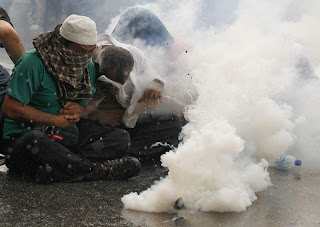 A friend who lived in the city offered to be my protector and together we devised a plan on what to do. Hubby was supportive and gave some advice on how to stay safe. My neighbours also wanted to come along. So fairly earlyish, my friend drove over to get me with no problem and we headed back into the city. Despite the roadblocks in some areas, we encountered no problems. In fact driving into KL was so pleasant because the roads were so clear. The police directed traffic where they had to and were generally cooperative (except for one we saw arguing with a man trying to get into his own condo). We got to a roadblock in the KLCC area and my friend explained that he lived in the area and they let us through, four people in a car dressed as if we were going hiking! 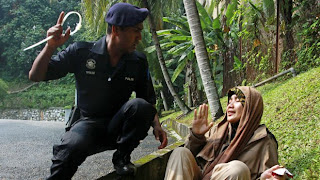 From my friend’s apartment block, we walked to Times Square and parked ourselves at the Starbucks for a coffee while we waited. A cursory look around the outlet and mall revealed that many people were doing the same thing. Meanwhile a whole van of police was stationed outside the mall but after a while they all went off.

We kept in touch with various friends around the city to find out where they were and what the situation was. At about 12.30 we started to walk up Jalan Hang Tuah towards the stadium area. We were not in big groups, just people out on a weekend stroll. We thought we would encounter police in front of the big police headquarters in front of Pudu Jail but there was nothing. When we got to the corner of Jalan Hang Jebat, we saw some police motorcycles and only a couple of cops. Lots of people were just sitting on the curbside under the eye of the cops. It was pretty clear what all these people were there for.

We walked along Jalan Hang Jebat in front of Stadium Negara towards the OCM and found many other friends waiting there. Apparently at one point the cops had given chase even though there was no reason to and caught some people and hauled them off. But from then on we could sit and wait by the curb without anyone disturbing us.

Jalan Hang Jebat and the small road that led up to Stadium Merdeka stayed pretty quiet. Members of the Bar Council (who had to suffer wearing their suits in the heat just so that we could spot them easily) walked around observing what was happening. At one point one woman in a suit sat herself at the intersection to take notes.

We all debated whether to stay there or move down to Petaling Street but we were afraid that we wouldn’t be let back up again. Then it started to rain. My friend and I sought shelter under some hoarding along with young people. Just then I got a message that we were to go to KL Sentral. After confirming this with a friend at Sentral, my friends and I started to walk down Hang Jebat just as a large group of people started walking up. The rain was pouring at that point and I didn’t know quite what to do, whether to tell people they should turn round or not.

Seeking shelter for a while under a shop five-foot way, I talked to various other friends and eventually decided to head back to the stadium area where I found my daughter and lots of other friends there. The main group earlier had gone up to Stadium Merdeka, did some chanting in front of the FRU and then headed down again. But many people hung about just to observe everything and soak in the atmosphere. One group of young people had yellow ribbons on sticks and started a little dance. Others were buying ice cream from a bicycle vendor who came by. There was a real carnival atmosphere.

I have to say that I never felt safer than when I was in the crowd. People recognized me and said hello. Some wanted to take photos. It didn’t feel any different from any other Saturday out. And to be perfectly fair, the cops and FRU in my area showed admirable restraint. They saw that people were not doing anything more than chanting and nobody was harming anyone so they just stood there and left everyone to do their thing. We came across a whole FRU unit blocking a lane next to the Chinese temple at the roundabout at the bottom of Jalan Maharajalela, waved at them and they waved. Cool cops!

Of course not everyone had the same experience. Here’s an account from a colleague who was in a different street:

Unfortunately my experience wasn’t so benign. I was part of the marchers (along with A and others) who were effectively kettled by the police in Jalan Pudu. FRU units to the front and back of us prevented us from leaving, and we were trapped by the walls of a construction site opposite Tung Shin Hospital after the FRUs pushed us back. It was probably the worst of the hotspots because of that: when the police started firing round after round of tear gas at us, we had nowhere to run to. I think they were determined to make an example out of us, because they bloody well tear-gassed and sprayed us with water cannons when they had no reason to do so.

We were all tear-gassed at least three, four times. An NGO staffer was hit by a canister. V told me that she saw people jumping off the second floor of the Puduraya bus terminal because the police had released tear gas too close to the terminal and the wind carried the fumes into the enclosed building. When the marchers ran for shelter in Tung Shin Hospital, the police fired tear gas and water cannons INTO the hospital grounds. Later the police lured us into re-assembling on the road on the pretext of negotiating a peaceful dispersal. They arrested the MP (Sivarasa) who was doing the negotiating, then — after ordering us to sit down so (as we realised later) we would be sitting ducks — they fired more tear gas and water cannons at us. A, myself and our companions eventually managed to find a way out from the trap via the Santo Antonius church and (irony of ironies) the car park of the Hang Tuah police station (near the monorail station). There were so many very brave people yesterday.

I now know that smearing toothpaste under the eyes to reduce irritation caused by tear gas actually works (thanks, A)! I’m still itchy and short of breath from all that tear gas, which is a bit annoying. But really, mostly what I remember of the rally was how moving it was: the solidarity among the protesters, how people looked out for one another. Whenever I was tear-gassed there was a stranger running along at my side and offering me and my friends salt to counteract the effects. When the police sprayed chemical-laced water cannons into the crowd and the people affected cried out for water to wash the stuff away, others turned and ran back toward the cannons with bottles of water to help. People helped others climb up a hill towards the hospital to escape (some guy helped me up the steep slope). Someone always stepped up to make sure that a panicked run doesn’t turn into a stampede, including an elderly woman who took it upon herself to guide the marchers to safety. She’s a first-time marcher to boot! Actually there were lots of first-time marchers, and more young middle-class urbanites than I’ve ever seen at any other rallies including the 2007 Bersih rally. At one point people started picking up the tear gas canisters and throwing them back at the police, or kicking the canisters safely away from the marchers and bystanders. I heard via the #bersihstories Twitter hashtag when the police fired tear gas into Tung Shin, there were people who grabbed the canisters and wrapped them in their own towels, then threw the canisters into the drain so there wouldn’t be so much fumes.

And another one, about people’s goodness:

My group has a lovely little story to tell as well, of how we escaped from the Tung Shin hospital area after one of the tear gas attacks. We took a little alley uphill between the shophouses, and there was a block of flats there. One of the residents told us to go through the building to get out through the back! We climbed upstairs and then along the opposite corridor a woman shouted and pointed, “That way, go that way, there is an exit out the back!” and we scuttled along our corridor, down the back stairs and found ourselves safe outside on Changkat Tung Shin or something like that.

Rakyat all contributing in their own ways!

There are many stories and photos, both good and bad, of the whole event. But to me what was most important was that Malaysians proved two things: one, they can assemble together on a common cause peacefully and two, therefore showed that they are a mature people. The fact is that there were all kinds of people there, young and old, all races and religions and all classes and creeds. I bumped into many young people, the children of my friends, who had come to see what it was all about and decide for themselves what to think about the issue.

Whatever one thinks about the issue that Bersih is espousing, we should all be proud of our fellow Malaysians who did not, despite dire predictions by some, behave like hooligans and destroy property and hurt one another. There were people hurt and one death but people who had participated in the rally did not cause them. The restaurants and shops around the area were doing roaring business as people got thirsty and hungry.

And by the way, I can’t believe some of the mean things being said about the man who died after being teargassed! My goodness, every time I read totally uncompassionate things like that, I know that I’m on the right side.
Posted by Kedah La at 10:19 AM